During the 2021 virtual convention WTLA will recognize three members for their service to WTLA, their clients and Wyoming.

Nominations are closed for 2021.

WTLA members are invited to nominate an attorney(s) who has been in practice 10 years or less who demonstrates skills, ethics and dedication to the profession and embodies the WTLA mission.  As well, the nominee should be an inspiration to the next generation of lawyers and all WTLA members.  The WTLA Awards Committee reviews all nominations and selects the recipient who is approved by the Board of Directors.

WTLA Member of the Year Award

Nominations are closed for 2021.

The award recognizes a WTLA member who in the preceding year, has exemplified and put into practice the philosophy of the Wyoming Trial Lawyers Association. WTLA members  are invited to nominate a lawyer(s) who demonstrate the mission and philosophy of WLTA in his or her practice, community or WTLA.  (See the website for criteria.)  Nominees may be in practice for any period of time.  The WTLA Awards Committee reviews all nominations and selects the recipient who is approved by the Board of Directors.

Each year the WTLA President-Elect nominates a member who is committed to protecting the rights of their clients and passionately defends our justice system.  The WTLA board approves the nomination. 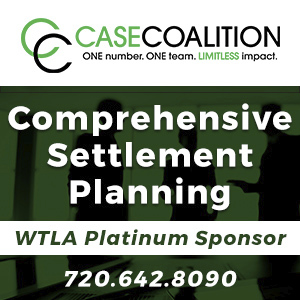